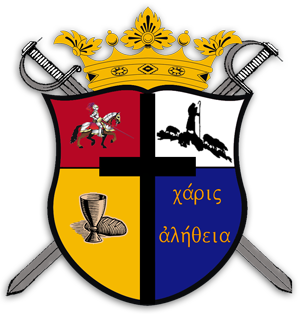 I chose a coat of arms to represent this ministry because of my Irish influences from when I was a little boy. Almost every Irish surname has a coat of arms, as do many other European Nations and our family’s coat of arms was always displayed proudly above the front door of our house on the inside. I was always fascinated by the fact that our family had this and it made me feel special and somewhat royal. Each symbol on our coat of arms meant something and as a young boy I would always ask my mother and father what they meant. Even though they had told me before, I loved hearing about each symbol again and how those symbols made the Sugrue’s special. Naturally, each time they told me about the symbols the story was a little different. Sometimes it was more embellished when they felt like spreading their feathers and sometimes it was terse in the motivation of getting rid of my incessant questions.

Unknown to me at that time was that I would become true royalty, and not just any royalty, but the greatest of royalty. I learned that the royal family of God was the greatest royal family to ever grace this earth. And so I had an idea to make our own coat of arms. I’m sure other believers who love their position in Christ might come up with other symbols for our heritage, but these are mine and they are the result of years of doctrine, failures and successes, and events that God has thrown me into by starting this ministry.
The crown on the top represents our only Savior who now sits at the right hand of God victorious. He is the King of kings and the Lord of lords forever. This is His third and last royal warrant. He will always be King and Lord by His ability to remain impeccable as He carried His cross to Cavalry where He exhibited the greatest manifestation of love that the universe has ever seen. To Him be the glory, and that is why His crown (diadema in the Greek) is prominent.

The two swords represent the word of God. One of them represents HEB 4:12 the word of God that is alive and powerful that gets into your soul and changes your paths of evil and sin to paths of righteousness. Once that has been accomplished for a long period of time the second sword comes into view as in Ephesians 6:17 where the word of God becomes your very own sword as an offensive weapon against your three enemies (the old sin nature, the cosmic system, and the kingdom of darkness). This sword is your only offensive weapon in the armor of God.

The silhouette of the Shepherd and the sheep comes from my study of John 10 and Psalm 23. As a sheep, the one who needs the most care and protection and provision, you have union with Christ which means you have eternal life with Him. The Shepherd will always do His best for the sheep. The sheep are helpless creatures and so are we. We take great comfort in the fact that the Shepherd desires a relationship with us, will protect us, and will always provide for us. This figure on the coat of arms is designed to represent our comfort and security in knowing that our Shepherd is the Lord Jesus Christ.

Underneath the Shepherd and the sheep are the Greek words charis and aletheia. These were the words that I chose for this ministry, “grace and truth.” The word charis means unmerited favor, and that is exactly what God has done in His introduction to us at salvation. He presented Himself to you as God who became a man. He showed you that He was willing to take your sins upon Himself so that you could be with Him forever. In turn He elected you and gave you a plan. He promised you that He would never leave you. He blessed you as His child way before you were even born. The question stands for every believer, “Will you accept all that God had accomplished?” If you do, you have accomplished charis or grace. Truth is what comes after grace. Truth is the solid conformity to the church age doctrine. Aletheia is a love of God’s word. Truth is the only communication of the Father to mankind. When grace and truth combine, not only is a person changed, but he has great impact on everyone around him. JOH 1:14 And the Word became flesh, and dwelt among us, and we beheld His glory, glory as of the only begotten from the Father, full of grace and truth.

Following the symbols clockwise we come to the bread and the wine which are obvious symbols of the Lord’s table or Eucharist. Eucharist is a transliteration of the Greek noun eucharistia. It is a compound word made up of “eu” - well and “charis” - grace, or to give freely. It means thankfulness or the giving of thanks for something freely given. The Lord’s supper is a reminder that everything that we have is given freely by means of the grace gift of Jesus Christ. EPH 1:5-6 In love He predestined us to adoption as sons through Jesus Christ to Himself, according to the kind intention of His will, to the praise of the glory of His grace, which He freely bestowed on us in the Beloved. The Lord commanded us to continually partake of this one ritual for the church so that we could bring Him into remembrance. Believers who accumulate doctrine tend to get arrogant over the amount of knowledge they have that most of the world does not. The Lord’s supper is a continuous reminder that anything you have in Him is only the result of Him freely giving it to you. Therefore, the Eucharist is a constant reminder that pulls us back to the foot of the cross where Christ made it all possible. During the Lord’s supper we are to focus solely on Him and not our victories or our shortcomings. This in turn reminds us that were it not for Him we would all be destined for the Lake of Fire, but because of Him we are freely bestowed with grace.

Next we come to the mounted knight. He dons the full armor which represents the armor of God described for us in EPH 6:1-23. Although there is no mention of a horse in EPH 6:1-23, I chose a mounted knight because we are always carried by our Lord. The armor of God is for battle against the kingdom of darkness. EPH 4:1-32 through EPH 5:1-33 challenge us to apply doctrine to the circumstances of life. Once the details of life have been mastered or overcome by the maturing believer he is then asked to be a witness in the angelic conflict. Our Advocate, the Lord Jesus Christ, presents us on the witness stand much like He did with Job. This means that we are at spiritual maturity and ready to handle the cross-examination of Satan. This is ultimate testing in the believer’s life and it is filled with undeserved suffering. But because he has picked up and put on the full armor of God the believer is able to handle any attack by Satan and the kingdom of darkness with all the problem solving devices. We stand firm against these attacks and defeat an enemy that is far superior in numbers, in intellect, and in physical strength. We defeat them because the power given to us through doctrine and the filling of the Holy Spirit is far greater than they. This represents the winner believer who will receive all of his escrow blessings because he has glorified Christ to the maximum. The armor will be traded in at the Judgment Seat of Christ for the uniform of glory and the order of the morning star.

There is the cross in the middle of the coat of arms. It touches all quadrants because it is the ultimate symbol of the love of God and the glorification of the Lord. From start to finish in our spiritual lives the cross is constantly our comfort, our confidence and our battle cry. Finally the colors represent the Trinity. Red, yellow, and blue are the primary colors that together make white light. White represents all three members of the Trinity working together. The individual colors represent each member individually as we often see them in scripture. They are co-equal and co-eternal; three persons that are one in essence. God is all and in all. To Him be the glory, both now and forever more, Amen!